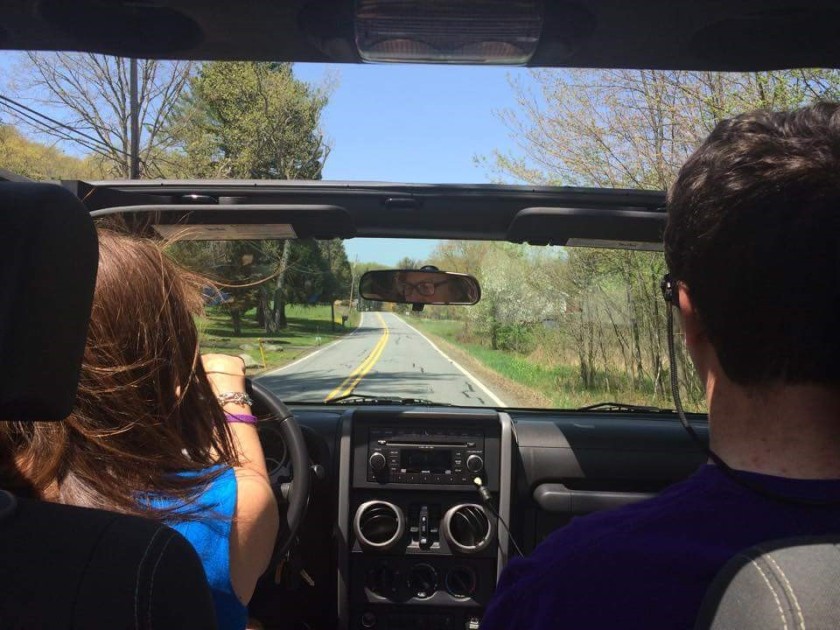 For a split second, in my mind, he was not quite seventeen yet. For a split second, as the wind whipped through our hair and the music blasted and the sun beat down through the open roof, I was sent back to that summer before it happened, that summer of happy, when he was just a beginning driver and the Jeep was only six months old, and dreams were alive and opportunities were endless and his future was wide open and we were all free and everything was perfectly fine.

I forgot that all our lives were now shattered.

As we drove, that entire three-and-a-half-year-heart-wrenching-span-of-time since the accident just seemingly blew out the windows and swirled with the dust particles that had been sitting inside the Jeep for the same amount of time, and then disappeared.

The heartbreak, the grief, the dread, the denial, the refusal to believe what the doctors told us, the twenty-four-hour-a-day care, and the total exhaustion. None of it existed in that split second.  Time rewound in sync with our distance and speed, and we drove faster and further away from the present.

As I navigated the roads, he adjusted the volume on the country music stations I had taught him to listen to and love so many years ago. He turned it louder and louder with his one good hand, and as he sat back and listened to his favorite songs he watched the old familiar roads and the scenery, the scenery he can’t usually see from his perch high up in the wheelchair van.  I knew how happy he was to be in his Jeep with the top off and the hot wind in his face, and my heart became lighter than air but full of something so much heavier.

I turned slightly toward him, and as I glanced at him out of the corner of my eye I pretended he was no longer disabled.  In my mind, then, he was fully abled. He was strong and tanned. He was sitting tall without slumping, without any form of assistance. He was all that a carefree teenage boy with a new Jeep and a new license should be.

I fully turned and looked into those beautiful blue eyes and I saw him smile. From my vantage point I could only see one side of his smile, so to me that smile seemed perfectly symmetrical and the muscles on both sides of his face gave the illusion of working together.   And as he smiled, I laughed. I laughed as untroubled and easily as I always used to laugh when I was with him in his Jeep going anywhere.  And I laughed until I began to cry.

How often had I begged to no one in particular in the dark hours of the night when my heart screamed with the pain of losing the boy I knew….how often had I begged and offered my soul to whomever might want it, for one more chance to be with him as he was before his accident?

“Please let me go back, just one more time.”

On that day, in that moment, as the dirt roads passed under his Jeep, we drove forward but time somehow reversed.  I knew I had been granted that wish of reliving a memory with the boy I once had. Not just in my mind or in pictures or dreams.  This memory was real enough that I could feel the wind in my hair and the sun on my shoulders.  I could smell the fresh cut grass and the wild flowers as we drove through the fields.  I could reach out and squeeze the hand of the boy sitting next to me in the passenger seat, and he could squeeze back.   I could taste the joy and wild freedom from so long ago, now so lost.

For a split second, I went back to the time before time stopped.

My Stories, my life